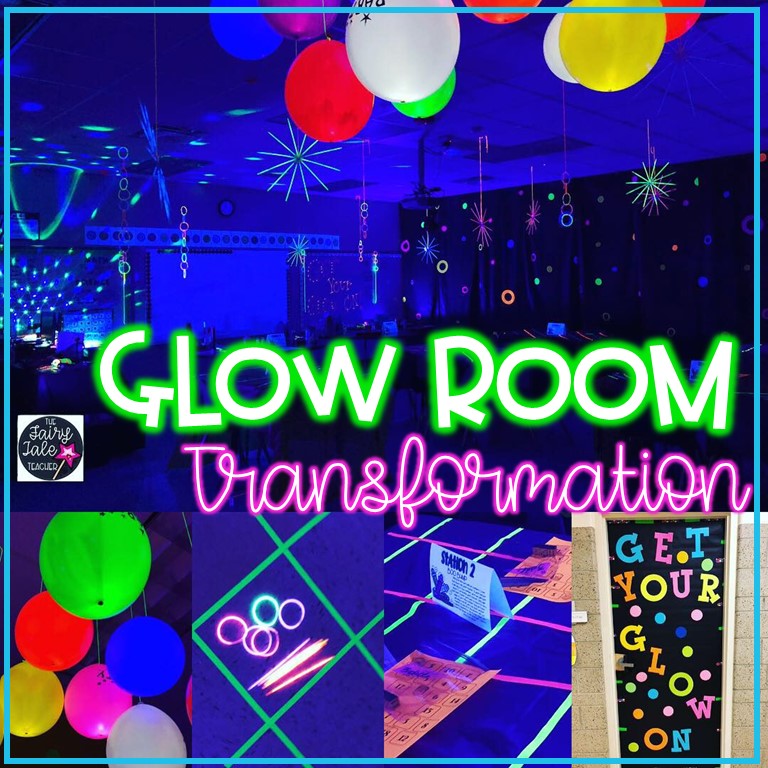 Hello All!  I have three words for you… GLOW – ROOM – TRANSFORMATION!    My team and I decided to embrace the chaos of Halloween and do room transformations!  I won’t lie, at about 4:15 the afternoon before Halloween, the thought did cross my mind that I may have bitten off a bit more than I could chew.  But by 4:30, I knew this room transformation would be completely worth all the effort… and it definitely was!  I will also say that it would not have turned out nearly so well without the help of some incredible room moms and my awesome partner teacher! 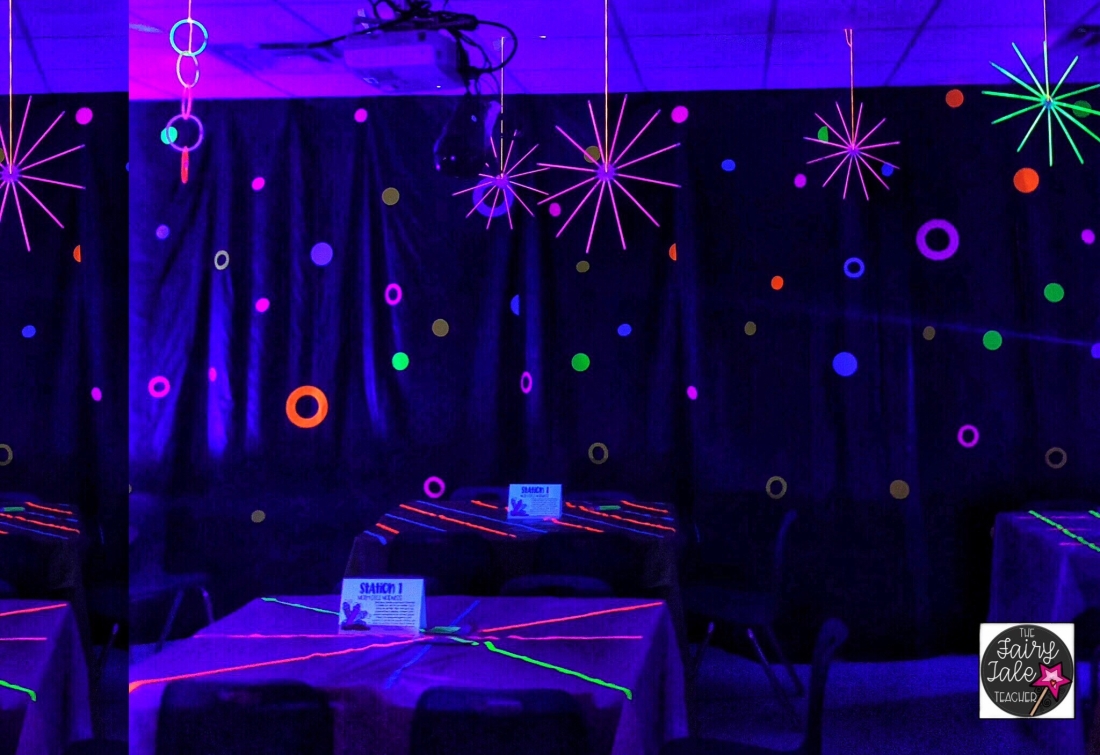 To achieve the look I wanted, I first used poster board and painters tape to make sure no light was coming from the windows (this is not a necessary, but our windows are relatively small, so it was super easy!).  Next, I used large rolls of black plastic tablecloths and stuffed them into the ceiling tiles and cut them at floor level.  I did this on the two longest sides of the room.  On the back wall I hung hot pink, neon green, and yellow plastic tablecloths.   I used my Silhouette to cut Astrobrights Neon Card Stock in circles (I fit six on an 8.5 x 11 page) the night before we pulled the room together.  I had about 150 circles when I was done.   I also used our school’s die cut machine to cut large and small Os to give some variation in sizes and shapes.  I think I probably had about 40-50 of those sprinkled in the mix. 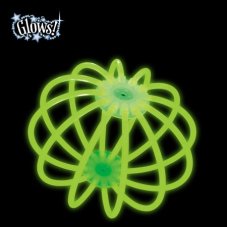 Hanging from the ceiling were glow stick cages from Wal-Mart.  I just connected them to one side only. With the black lights, I didn’t even break the glow sticks for them to show up!  The black light brought out their colors, and the colors of the neon yarn I used to hang them.  I also used some glow bracelets and linked them together to hang from the ceiling as well.  What you see pictured is actually more than 15 hours after the bracelets were bent and linked together.  I also hung 1 pack of glow in the dark balloons (also from Wal-Mart) from the ceiling.  I just aired them up before school started the morning of the transformation.  Side note – Don’t worry about filling with helium! They’re too heavy and won’t float anyway! 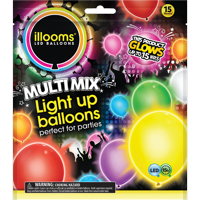 To get the level of glow I was looking for, I used two higher powered glow lights purchased off Amazon.  One was actually part of a Donor’s Choose grant from a previous year.  I used another long fluorescent type black light, two black light bulbs in lamps, and one purple yard light (all of these were purchased by a parent from the local Halloween store).  I also used a laser light that was purchased off Amazon through Donor’s Choose! 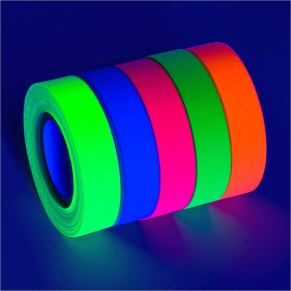 From there, we grouped our desks in fours and covered with tablecloths.  I used Glow tape from Amazon (see above) for the patterns on the tables.  Five rolls ran about $14.  For next year, I will probably buy two sets of five because that stuff was amazing!  I also used the Glow tape for the Tic Tac Toe boards.  It’s very similar to painters tape in the level of stickiness, so it pulled up very easily after we were ready to remove it. 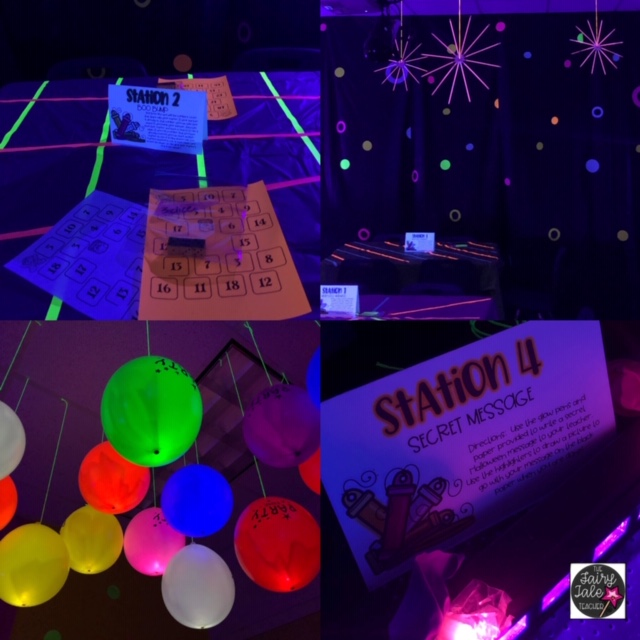 As far as activities go, we had 5 stations.  We linked our activities to our second grade Math, Writing, and Science standards.  All of the math activities were found on Teachers Pay Teachers from various teacher authors.  I just printed the math activities on neon Astrobright card stock in the brightest colors I could find.  For writing, the learners used glow light pens (purchased on Amazon – 1 set of 24 was about $19).  There were cheaper options, but after reading reviews, I went ahead and spent the extra few dollars. They worked perfectly and can be used for future projects, too!  The students wrote a “secret message” narrative about Halloween. For our science standard, we created slime. We added glow paint into the mix to make it even brighter! With this project, learners had to  determine and describe the observable properties slime, make observations, and classify the materials used to create the slime.  Finally, I created the station cards for each table with specific instructions for activities and printed on white card stock!  It ended up being an amazing day that I hope my students will remember for a very long time!! 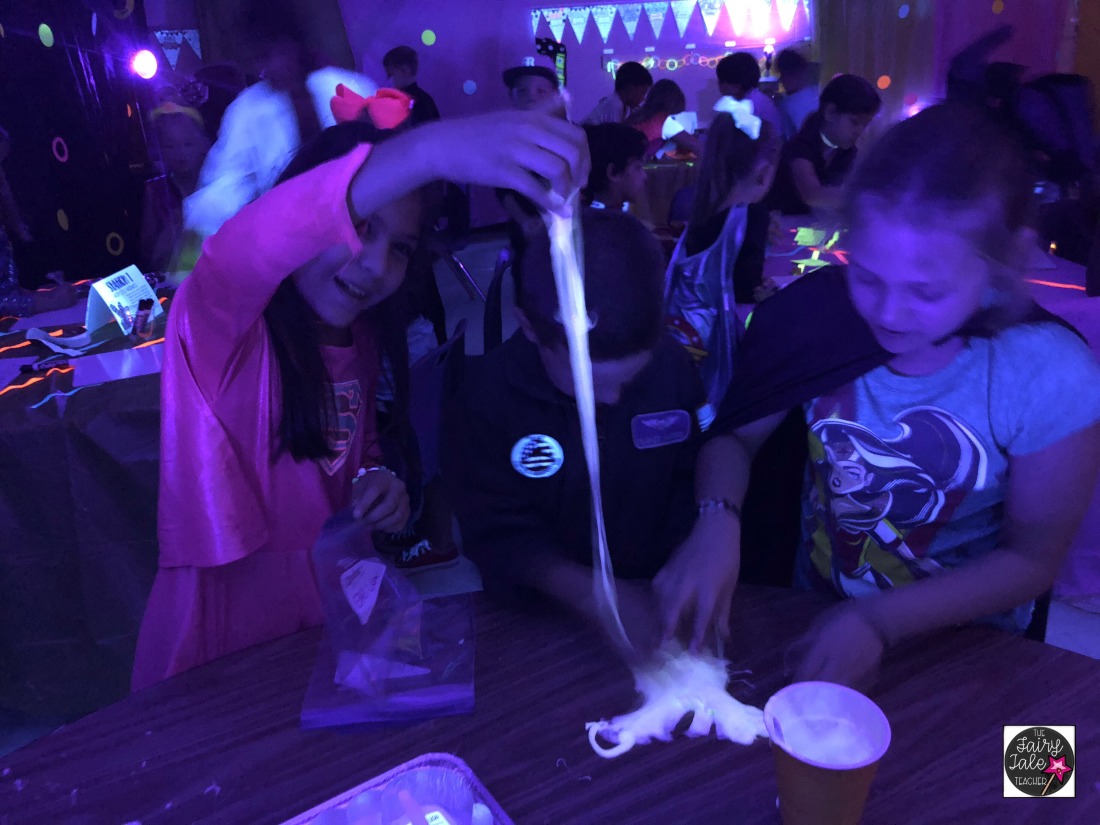 Slime – 2-PS1-1. Plan and conduct an investigation to describe and classify different kinds of materials by their observable properties.

Math Dice Madness  – 2.NBT.1. Understand that the three digits of a three-digit number represent amounts of hundreds, tens, and ones 2.NBT.3. Read and write numbers to 1000 using base-ten numerals, number names, and expanded form. 2.NBT.4. Compare two three-digit numbers based on meanings of the hundreds, tens, and ones digits, using >, =, and < symbols to record the results of comparisons. 2.NBT.5. Fluently add and subtract within 100 using strategies based on place value, properties of operations, and/or the
relationship between addition and subtraction

Secret Messages – W.2.3. Write narratives in which they recount a well-elaborated event or short sequence of events, include details to describe actions, thoughts, and feelings, use temporal words to signal event order, and provide a sense of closure.

Published by The Fairy Tale Teacher

View all posts by The Fairy Tale Teacher